Digital Transformation is a term like cloud computing, big data, and innovation, that have come to be used so broadly, they could be used to mean just about anything.  I also know people who have digital transformation on their LinkedIn profiles, but it’s not clear what they mean by that or what specific experiences they have had.

One of the biggest challenges with any big change is that it can be expensive and risky, and it can be much easier for senior leadership to say “no” than pursue the change unless there is a clear forcing function (such as a competitive threat), or an overwhelming business case.  Things that prevent a major transformation are very well explained in the book, The Innovation Biome, by Kumar Mehta – available on Amazon and required reading for anyone working in or near this arena.

Many have written specifically about digital transformation, and there are all sorts of pictures depicting what it is and how to think about it.  This one by Mike Rogers is an interesting take on it. 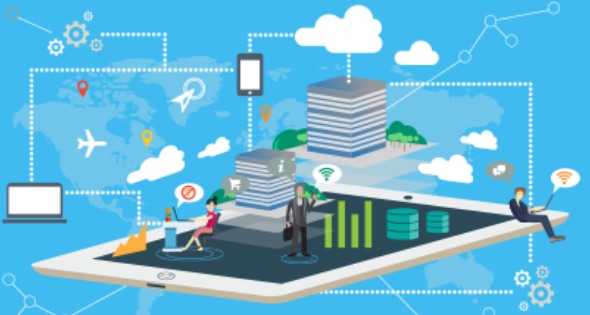 For the past ten years, I have led work at several big companies including Disney, Starbucks, Microsoft, and others.  In some cases the work was labeled digital transformation at the outset, and in other cases, it was only called that after the fact.  What I have learned is that there are some classes of work where it was called digital transformation before the work began, and some where it did not, and I am going to use some examples to elaborate on why it matters.

Over the last year, I have been working in an industry that is new to me, commercial aviation, and what I have observed is that there is a category of digital transformation that is new to me, but it won’t surprise me if there are attributes of this opportunity that extend to other industries as well.  Most aircraft flying around today are old.  Boeing 737s that were made 40 years ago can still be flying around today, and Airbus A320s, which are newer, can still be over 20 years old.  There are data buses on all aircraft, that in large part for safety reasons, broadcast status information about the aircraft, whether it is in the air or not, every minute, sometimes more frequently. Everything from how fast it is going, how much fuel the aircraft has, the level of potable water on board, to whether a door is open or closed, and on and on.  There are two things that are shocking about this data:

This information would be so useful to the airlines in many, potentially obvious, categories:

Tapping into this wealth of data for both real time as well as historical patterns analysis as well as opportunities for machine learning and artificial intelligence leads to obvious opportunities for cost savings, operational efficiencies, and increased safety. So this then is another class of digital transformation that wasn’t even possible until very recently.  There are some simplistic and perhaps obvious comparisons to the Waze driving application and the real estate site Zillow, that those businesses were not possible until certain data was available as well.

APiJET is a company I have been involved with for nearly a year, and they have figured out how to deliver this data to commercial airlines.  Elevāt.IoT is another company doing something similar on the ground with industrial equipment.  So there are companies that have found a way to get to this rich data and it will be interesting to see what other industries find ways to transform by tapping until previously untapped reservoirs of data. If you know of others like these, I would love to hear about them.