By now most of us have read, or know the story from Freakonomics, by Steven D. Levitt, and Stephen J. Dubner about what really caused the rapid decline in US crime starting in 1994.  While many took credit for it, and there were many plausible correlations, the simple cause was a 1973 US Supreme Court ruling.   It’s a story they tell well and if you want to learn more about it – there are lots of articles – even this YouTube video.

Online and with credit cards, fraud is something that has been growing for years and this article does a good job explaining why it’s happening and some things people can do to protect themselves. 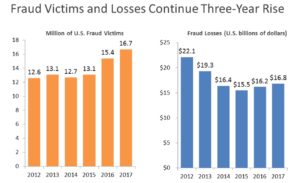 What this article does not do is speak to the root cause of the fraud (the brilliant simplicity of Levitt and Dubner’s book is being clear about the difference between correlation and cause) – which is now something we can stop.  The cause of the fraud is that through our credit card (especially online transactions known as “card not present” transactions) – there is no step to ensure the person is who they say they are.  That’s because when people create an account, whether it’s at Starbucks, or Facebook, or Nordstrom – none of those organizations do what AuthenticID calls “first mile” authentication – verifying the person is who they say they are.  The first time any new account is established either in person or online – first mile authentication involves taking a photo of a government ID like a driver’s license or passport – verifying it is valid and has not been forged or tampered with – and that it’s not a picture of a picture, and then a photo of the person, can be a selfie if they are home, or a retail person can take the photo, which is then checked for liveness (not a picture of a picture) and matched with the government ID.  All of this happens in less than ten seconds – and once the identity has been confirmed – the user, or in some cases the organization/merchant, can choose their biometric preference be it a finger print, facial recognition, corneal scan, or voice for nearly instant authentication for future interactions.

First mile authentication does several things for both the users and the merchants:

The list goes on, but those are the big ones.

So now that first mile authentication is easy, and it can be done faster and easier than the nonsense of passwords and IDs, this will cause fraud to drop very fast.  2018 is the year for it, almost 25 years after the last huge drop in crime Levitt and Dubner talked about.