I am not the first to observe that the so-called Sharing Economy is a terrible label for what’s going on.

Derek Bacon came up with this image of what it means: 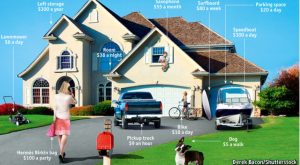 But that oversimplifies what’s really going on and why it’s a big deal.  It’s a big deal because it has turned supply/demand economics on its ear.

The enabler of the sharing economy is increased visibility or transparency of supply and demand at the individual level (whereas supply used to only be from big companies with marking budgets and 2 degrees of separation word-of-mouth) and demand was in most cases faceless (that is Nordstrom knew how many people bought the shoes they advertised in the Sunday newspaper insert, but they had no idea who the buyers were).

Today supply has come down to the individual level and instead of only having 2 degrees of separation communication (telling your neighbor they can borrow / rent your lawn mower), it is now global.  But what’s key is that the supplier doesn’t have to know the buyer.

That’s because demand is no longer anonymous. What the Sharing Economy really has done, is to add a layer of structure/infrastructure to the communication at that individual level.  20 years ago we could send an e-mail asking our friends if they knew someone who wanted to rent their spare bedroom – today airbnb is a structured way of linking that supply and demand for that specific need.

In that sense match.com was one of the killer apps for that linkage of supply/demand linkage at the individual level, where we came to trust communications between two people who don’t know each other.  So we shouldn’t focus as much on Airbnb and Uber as the bow wave of the Sharing Economy – we need to go farther back – to companies like Match.  Update – Sonya “Swipe Right” Schwartz did this really thorough write up on match that’s a must read.

So then a company like Jet.com is simply a logical extension of that new transparency, back “up” into the supply chain to increase transparency of costs.  Internet of things, IoT, is a similar increase of transparency at the post-transaction experience level that we are learning to expect because everything is specific and structured at the individual behavior level.

So now that we have this transparency, in a structured way, and we trust – even expect it at the more specific way that Airbnb and Uber have offered – we expect it everywhere.

So should it be called the Transparency Economy? The Power to the People Economy?  I don’t know.   That’s not really my department.

I think the bigger question is that now that people see this happening, with Apple, Google, Netflix, Amazon as the untouchable tech companies (Farad Manjoo is on the right track with his thinking on this article – though he stops short of actually calling them untouchable) – is that why companies like Under Armour are sprinting to stay ahead of them.  This article in Geekwire about Kevin Plank has the right idea.

What it boils down to is that now that Match, Uber, Airbnb have turned supply/demand on its ear, as the owners of all of the data – which informs a lot of behaviors, will Apple, Google, Netflix, Amazon come and and take control of this new supply/demand universe as the new order of things settles down.

I don’t think it’s going to be quite that simple.  I do think we will see some unlikely M&A going on where Google might buy the Ford Motor Company.  If nothing else it would be a fascinating turn of events relative to what Nobel Laureate Ronald Coase predicted (basically it made sense for Ford to grow to be so huge when it did in the 1920s, because the search cost of finding a company to perform a service like growing rubber for tires or hiring ships to move cars exceeded the cost of hiring someone to do it internally – the internet seemed to flip that upside down – proving Coase again correct as search costs plummeted – suggesting a company should never get big again because search costs were so low – you could always find someone to do it better/faster/cheaper instead of hiring someone).

The question is whether it once again makes sense for companies to get huge again?