Not everyone in the country watched Tiger Woods win for the first time in five years, but record numbers of people did.  Just look at this picture to see how huge the crowd was at the tournament – I have watched enough golf to know this is an enormous crowd for golf. 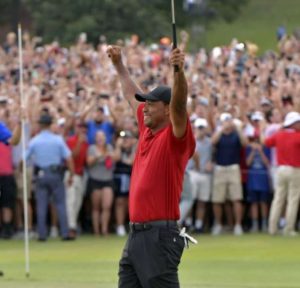 And I haven’t yet met anyone who wasn’t aware of the significance of this win, given his dramatic comeback from major back surgery as well as some rough personal stuff, albeit self-inflicted.

The so what is that I think the enormous surge in interest in the story, and the post victory celebration actually had less to do with Tiger Woods than the fact that this country is so sick of bad news and things that are just flat out embarrassing about the US, that we needed something really positive – something totally American, flaws and all, to be so dominant in this event (in the four days of the tournament – he never trailed).  He didn’t just win – he was in a league by himself.

One of the reasons I think this is the case, is that it’s not the first time it has happened.  In 1973 a horse named Secretariat became the first horse to win the Triple Crown in 25 years.  1973 was a dark time in the US – we were still struggling with Viet Nam, President Nixon’s Watergate hearings were in full swing (which if you are too young to remember – no US president had ever been dragged through the mud like that before) the economy was bad, things were bad all around.  So the intensity of support for Secretariat as he went in the Belmont, the third leg of the triple crown, all eyes were on Secretariat.  And like Woods last weekend, Secretariat didn’t just win – he was in  a league by himself.  Usually, when they take the photo of the end of the horse race – it’s at a 90-degree angle to the finish, so if there’s a “photo finish” that is too close for the naked eye – the photo allows them to see who really won.  This is the photo taken from the finish of the Belmont – the camera is pointed back down the track because Secretariat won by 31 lengths, which is shocking to me still to this day and I have known this fact for years. 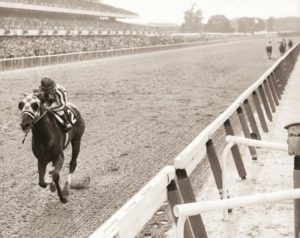 And as a last tidbit of Secretariat lore – not only was he in a league by himself in 1973, Secretariat still holds the record times for each leg of the Triple Crown, including the Kentucky Derby, the Preakness, and the Belmont – and because the races are such different distances  – which is why it’s so hard to win all three – to have the record for all three for 45 years and counting – is also shocking.

As you are probably aware – there have been many books and movies made about Secretariat – and it’s common for the commentary to focus on the fact that the US needed a great story about something purely positive amid so much bad, depressing, and negative news.  And Secretariat delivered and the celebrations went well beyond a simple love for horse racing.

Without getting into the specifics – it’s pretty obvious things are pretty depressing now.  The Kavanaugh Supreme Court hearings that are going on right now are the icing in the cake for an embarrassing and dark time in the US.  So thank goodness for Tiger Woods making the greatest comeback in sports history (according to the announcers on the golf tournament – which I will admit, I watched the last two rounds in full).  That marked 80 career tournament wins for Woods, who Is only two back of Sam Snead for the all time record.  It won’t surprise anyone if he breaks that record and that record remains as untouchable as Secretariat’s – but the important thing is that it was just the boost a lot of people needed to be reminded that there is still greatness here.