This is the third in a series of posts on how brands are faring with regard to customer experience.  McDonald’s and Nike were first covered, using a construct from this article in the Harvard Business Review (https://hbr.org/2015/06/the-internet-of-things-is-changing-how-we-manage-customer-relationships).

McDonald’s and Nike are household names and don’t need any introduction. Alaska Airlines doesn’t fall into that category at this point.  For the last 40 years, Alaska Airlines has gone from being a little Seattle-based airline that goes back and forth to Alaskan cities and some of the major cities on the West coast, to a fully national airline, with non-stops to most major cities on both coasts, and increasing numbers of international flights.  Having grown up in Seattle, I have known about them my entire adult life.  When I was a teenager, they had some funny ads that promoted their food (which was their primary point of differentiation at the time – no more).   Better service was often a theme in their TV ads, and many of them were funny, which also separated them from the big guys like United Air Lines (my carrier of choice for a long time – in part because of their global reach) – this ad is a good example of their 1980s humor https://www.youtube.com/watch?v=EYspsgIjb4U.

As they grew up, they spent less time focused on food and more time focused on price and their frequent flyer program.  One of the benefits of the Alaska program was that because most of their flights were short, it didn’t take as many miles to earn status with them as it did with other airlines.  As their domestic footprint grew, and their prices became more competitive, they became my airline of choice, and they have remained that way.  But they still have a lot of room for improvement, and here’s my take on how they are doing on the six points from that HBR piece – noting three elements for each point: 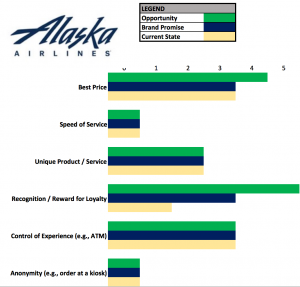 Best Price.  Southwest Airlines seems to have cornered the market for crazy cheap flights, though if you plan far enough ahead, Alaska has some pretty incredibly cheap flights.   So the way they are set up they don’t seem to have the opportunity to be a best price airline, and while they advertise some really low flights, it doesn’t seem to be at the core of their brand promise.  One thing Alaska faces that is less true for Nike and McDonald’s, is that they really have distinctly different groupings of customers.  I believe that some part of their customers only flies them when Alaska has the cheapest flights, so in that sense those customers are not brand loyal to anyone – their loyalty is to the best deal.  My bet is that about 10% of their customers fall into this group.

Speed of Service.  This scored a zero in all three categories because it’s not really relevant for commercial flights.  On time departures and arrivals are important, but the airlines don’t seem to have much control over it even though they seem to take credit for it when the numbers are good (there is a section about fielding in baseball in the book Moneyball that points out that in many cases fielding involves several players, so crediting any one player with the success or failure of a play doesn’t make much sense – I think the same is true here for on time departures and arrivals).  I did a summary of Moneyball – if you would like to see it, in a new format I came up with, e-mail me at ric@ricmerrifield.com.

Unique Product or Service.  With commercial airlines, there’s only so much they can do, especially in coach, to be unique, unless they charge a lot more.  Add to that the fact that it’s common for the time spent in an airport and TSA to be more than 50% of the experience time on a trip – and the airlines have no control over that.  Having said that, I have flown United and Delta in the past 24 months, and I will say that those experiences on the flight were awful compared with Alaska.  Alaska at least acts like they care about your experience – the other airlines acted like they could not care less. 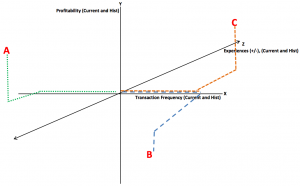 –>Recognition/Reward for Loyalty.  I put the arrow on the left because this is the big one for Alaska.  I mentioned customer groupings up above in Speed of Service.  This is where customer groups matter most for Alaska and they are missing it.  The above chart has three axes, customer experience (which is a generic notion of positive to negative), transaction frequency (how often to they fly, which is the traditional key measure of a frequent flyer program), and profitability.  The example I use is that if George and I each fly back and forth to San Francisco every week (which a LOT of people from Seattle do) for six months, we will each earn the same number of miles.  But George plans ahead, and knows this and books all of his (6×4=24) flights in advance, and gets his round trips for $200, knowing that if he has to change or cancel, it my cost him, but his initial cost basis is really low.  I, on the other hand, am a total last minute guy – I book my flights every weekend for the 6AM Monday flight out (affectionately known to some as the “Nerd Bird” because everyone flying to the Bay Area at that time is probably in software) and the round trips cost $1,000 and I always change my return flights which cost another $250 (until I earn gold status in their frequent flyer program – and then change fees are free).  So my 24 flights cost $30,048, compared with George’s $4,800.  I paid 626% more, with a spend delta of $25,248.  If I had planned ahead like George, that is $25,248 erased from their top line of revenue, and since I probably don’t incur any extra cost except for the time spent on the phone managing my flights and changes, almost all of that $25,248 would also go straight to the bottom line.  So if you have two customers with identical miles and they both have bad experiences, do you recover both of them the same way?  Alaska does today – and that’s crazy.  The unprofitable customer should get some sort of verbal “we are so sorry” to be sure the loyal customer, George in this case, knows they know he had a bad experience – that doesn’t cost them anything and George feels a little better.  In my case, they should immediately react and do something and tell me they guarantee I will fly first class next time (or something along those lines).  They should be willing to spend money to recover in my case because I am so profitable for them – they should spend money to keep me loyal.  But right now, as far as I can tell, Alaska ignores the experience and profit axes in the above, and doesn’t make any effort to treat their more profitable customers any differently.  One asterisk on this point, is that they should mimic what the folks at Disney do – where no one gets “observably” different treatment.  There are VIPs at Disney getting the red carpet treatment – but it’s not observable to the average customer (they call them Guests).  Alaska should call me and shower me with apologies and gifts in a way George would never know about.  That’s where I think they should be spending their time and money.  It wouldn’t take much data analytics to build a model with just these three axes – but it would be well worth it.  There are also things Alaska should do with respect to “annual” status of MVP, Gold, and Gold 75K (their three mileage tiers), but I will do another piece about those changes which would also be very inexpensive and would likely lift revenue and profits, and overall customer experience.

Control of Experience.  This is one where Alaska has done a pretty good job, and it’s also an area where customer experience journey mapping is highly useful for all groups of customers.   The customer experience journey spectrum often starts with steps labeled things like “Discovery” and “Plan” where people have decided they want to fly to someplace, and there are many different ways to start – some start at Expedia to look for the best price – people like me will go straight to the Alaska Airlines web site and start booking there.  From the time you start booking, to the time you check in (at home or at the airport), Alaska does a very good job, as good as anyone, giving the customer control.  There are some pretty obvious benefits to Alaska for doing this, in terms of keeping operational costs down, but this is still a big deal for some customers, customers like me.

Anonymity. This one is moot for airlines, with all of the security in place, there is no such thing as anonymity in commercial travel, so this isn’t part of the travel experience.  For celebrities there are some elements of this – I have a funny story about the former Atlanta Braves pitcher John Smoltz who was trying to be anonymous on a flight – that’s a funny story – ask me about that some time.

Anyway – that’s my summary of what’s going on with customer experiences at Alaska Airlines.  They need to do more groupings of customers so they can treat the different groups differently, and that will impact customer loyalty, as well as the top line and bottom line dollars.

Amazon.com and Disney are on my short list for brands to cover next – send me your thoughts on who you would like to see next.