There is little doubt that there will be a lot of activity in the world of mergers and acquisitions this year.  Sure Facebook and Groupon will go public (though Groupon has enough flaws, I wouldn’t be at all surprised to see them blow up or get passed by Tippr or someone else – remember when MySpace ruled the world?) but everyone has loads of cash, and lots of companies have huge stock valuations that make M&A cheap.

So why not buy some revenue or market share or more differentiation, or greater profitability in these circumstances?

I think the list is very long on who will get bought, but I have picked 11 (since this is the year that goes to 11 . . .that I think will go, and I have also made some suggestions about who will gobble them up.

I did try to break them into two categories, consumer/social and business.  One of the reasons I did that was because I read a report from Merrill Lynch dated January 4, 2011 called “Eleven Internet Sector Themes for 2011” which is one of the best investment reports I have ever read.  One of the statistics they cited was that in 2010, 14% of all internet traffic was spent on social networking sites.  WOW.  Talk about a huge trend.

I put together a diagram, but here’s the list with a little bit more detail (in random order):

1) doxo.  Doxo is a company I have blogged about before.  They offer free online bill pay services – one stop shopping and they keep your billing history.  Sounds like a yawn until you learn more about how they make their money (they cut down on postage for the billing organizations and get paid in return).  Because they have done the legwork to establish the major relationships needed with the billing organizations, the barriers to entry in this space are pretty high, and with such an appealing free service, I think any number of existing big companies would be smart to buy them into a space that will see lots of users and not a lot of competition.  Anyone from Concur to Microsoft would be smart to buy them now when they are in their infancy.

2) Yelp.  There was a time when this was a competitive space, but now it’s not and Yelp has won.  That’s not really news.  What has changed in the last year as we have seen with things like FarmVille is that everyone likes to see where things stack rank.  People want to vote for their favorite places and I think with the model Yelp has, they can make the voting more social and expand fast in a world where 14% of web traffic is social.  Obviously Facebook and LinkedIn would be smart to look at them, as would Amazon and Netflix where customer ratings are so vital.

3) Tippr.  I mentioned them earlier.  If Groupon is really already worth $15, spend a billion to get Tippr and aggressively highlight the major flaws in Groupon, and win.  Sure there’s risk, but lots of companies have a billion dollars to burn and Groupon’s flaws are so obvious, the right team could crush them like a tube of Pepsodent in no time.  If Yelp can afford them, this would be an outstanding brand extension for them, but it’s also a good play for Amazon and others.

4) Gist.  I am a little amazed Gist didn’t get acquired in 2010, but as the social web gets sticker, the more attractive Gist gets.  Gist aggregates all of our social interactions into one place.  No, it’s not really painful to alt/tab from LinkedIn to Facebook, but we are a lazy lot that loves convenience – we buy pre-cut salad in a bag for crying out loud.  And the think about Gist is that it makes the buyer the main page of all things social.  Smart for Facebook, but it would also be really clever for someone like Microsoft who, other than an investment in Facebook, is otherwise absent in the social world.

5) ShiftHound or Shiftboard.  Shiftboard is one of this niche companies that does one thing and they do it really well.  For organizations that work in shifts, they let the people who work the shifts sign up for the shifts they want and they also let companies assign shifts.   It might sound like a bit of a yawn, but one thing you hear over and over is that it’s not really clear to people who does what in cloud, so the more specific applications you have, the clearer you can be to people about whether you are relevant to them.  That’s why I think anyone from Concur to Salesforce, to Microsoft would be smart to start buying companies like Shiftboard.  ShiftHound is roughly in the same space but I am told they are true SaaS staff scheduling combined with great Open Shift Management (OSM) functionality for any small to mid-size entity that is scheduling shift-based staff.

6) Limeade.  Limeade is another sleepy little company that may sound like a yawn, but they have now been around long enough to have a pretty interesting customer base.  Essentially they have figured out how to get people to personalize their plans to get healthier, including, but not limited to, weight loss.  I have blogged a lot in the past about the connection between obesity and diabetes and the out of control health care costs.  If someone like Kaiser Permanente were to scoop up Limeade, not only would it send a really powerful “we care” message to their customers, it would also help them help their customers reverse the trend of rising health care costs.

7) ReputationDefender.   I am also surprised this one made it through 2010.  Most of us have no control over what information about us is out there on the internet.  ReputationDefender gives you complete control.  Given how much bad press FaceBook has gotten about subscriber security, I expected them to buy this company, but at this point, our personal security and privacy is becoming so important, I would be surprised to see Google or Microsoft to buy them.  It would send a really powerful “we care” message that would boost any brand.

8) Concur.  Already a thriving cloud services company in expense management, they are they only major player in this space which Merrill Lynch estimates at a $639 million space.  So Amazon, Google, or Microsoft could buy them to further clarify the role they are playing in cloud. Salesforce could use them to further extend their platform message.  Concur isn’t cheap, but this is one of those cases where you can ask how expensive it will be to NOT buy them given how successful they have become.

9) ActiveWords.  OK, not really a cloud play.  Another sleeper of a company, but if you want to get some differentiation in a huge area where today there is no differentiation, you buy ActiveWords if you have anything to do with keyboards as a hardware play or a software play.  Anyone who has an Apple product knows how bad that software is at helping us finish typing a word, ActiveWords has this all figured out and has taken it to the next level where you tell it when you want it to launch a web site.  So if I tell it that when I type “NYT” to ask me if I want to launch the web site for The New York Times, it works.  Talk about saving time and keystrokes. . . . No brainer for Apple or Microsoft or Motorola. The folks at ActiveWords have figured out a key component of productivity.  Saving time does equal saving money.

10) Symantec. OK, not so much of a sleeper, but they are one of the gorillas in the $4.25 billion security space.  Buy market share, revenues, and more differentiation.  Sending a “we care” message helps the brand, why wouldn’t Microsoft or Google buy them?

11) I4CP.  The institute for Corporate Productivity may sound like another yawn, but HR related Cloud services are a $3.36 billion space this year.  I4CP is profitable and growing and they have an amazing list of clients.  Concur, Salesforce, Microsoft, Google would all benefit from additional services and this one wouldn’t cost them an arm and a leg. 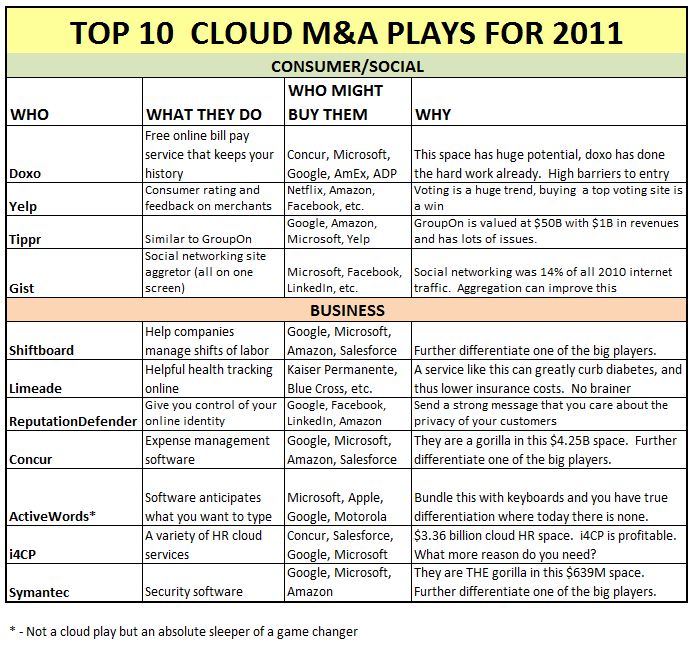